On an overcast January afternoon, twenty-two golfers joined in the nine-hole tournament. We had two flights and prizes donated by Jackson Park Golf Course compliments of General Manager Kathy Wake. Low Gross of Field went to Jay Clark (39) and Low Net to Jimmy Bucher, also 2017 Low Net, at three under. Honey pots went to low net in each flight, KPs on #2 and #7 – won by Reed Johnson and Michael Bade, respectively, skins, and a blind draw Best Ball Two-some. After some revision, the final results: Clyde Carlson Day Results.

After the golfing, at the meeting at Elliott Bay Brewery, we celebrated Honorary Member Clyde Carlson, who generously donated $350 to the Men’s Club this year. It was good to see Clyde again after last year’s hiatus. 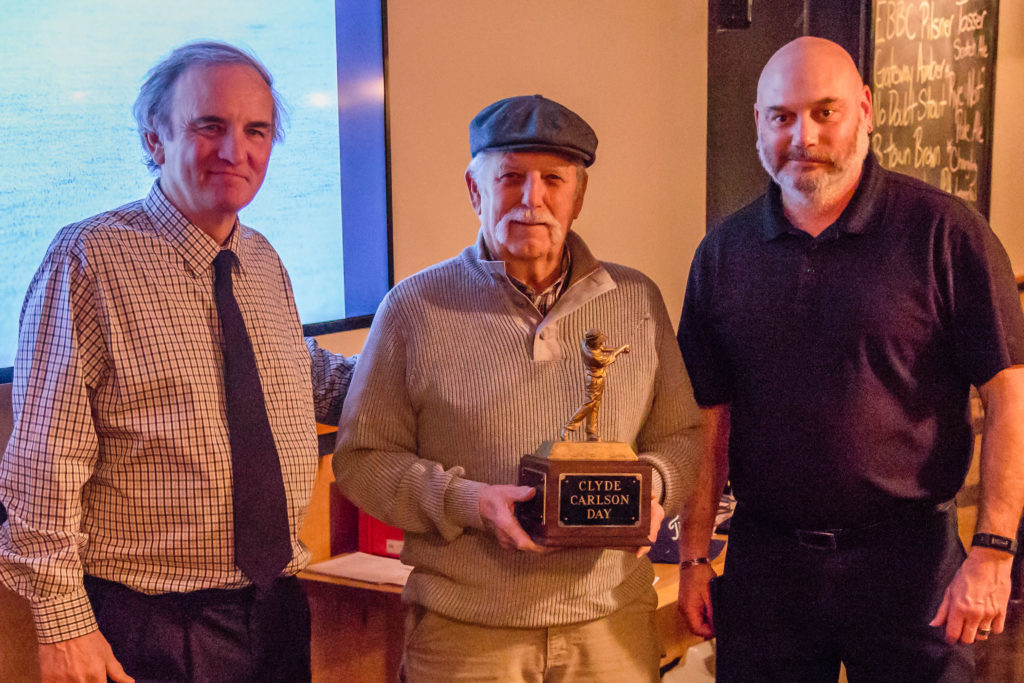 We heard reports from Peggy Tosdal—Acting Manager for Golf and Tennis at Seattle Parks, Kathy Wake—General Manager at Jackson Park, and Bob Maddox—Golf Course Maintenance Supervisor, who announced his upcoming retirement for this year. Dan Harrington—Golf Pro, announced he has gone to work at Glen Acres, thanked us for his year at Jackson Park, and welcomed our interest to play at Glen Acres. As a follow-up to Peggy’s report, she has provided a map of the Jefferson Park course revision, to be completed in the Spring of 2019. The file is too large for this site, so will be sent out in an email to the membership. 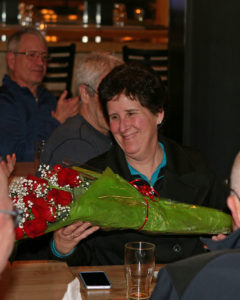 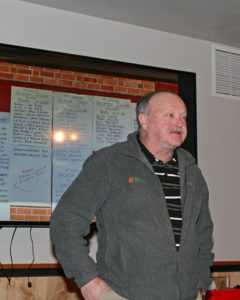 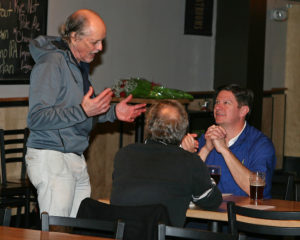 Annual elections were held. There being one person for each position, the officers and trustees were elected by acclimation. Returning are President Jeff Schoening, Secretary Mark Ohrenschall, Treasurer Dan Puetz, Sr, and Even-Year Trustees Jimmy Bucher, Walt Dickhoff, Jason Hart, and Reed Johnson. The newly elected are Vice President Lee Jones and Trustee Jake Bresnahan. Kyle Johnson, retiring Vice President, was thanked in absentia for his years of service, including five years as Vice President.

The five Even-Year Trustees not up for election are: Roger Brown, Nick Cail, John Clements, David Foreman, and Mark Persinger.

Mark Persinger presented a plan to rename the Jackson Park restaurant “Niblick and Spoon.” He collected pledges for the construction of a sign featuring a donated niblick and spoon, two old-fashioned golf clubs. More details to follow on this project. 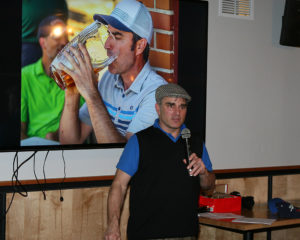 Mark Persinger, with photo of Jim Huckabay with the Seattle Cup 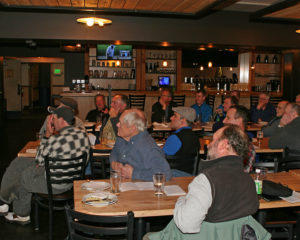 Jeff Schoening reviewed 2017 achievements and plans for 2018, such as playing the Field Days and Two-Day from blue tees, Brett Polen’s 2018 tournament calendar on the website, and over forty weekday tournaments beginning in May, a month earlier this year. We strongly encourage people to sign up for tournaments online – there is no extra fee and it helps with tournament setup.

With thirty-six people in attendance, we enjoyed good food and company, a raffle run by Lee Jones, and a slide show from the past year presented by Jeff Schoening with an assist from Jimmy Bucher. Thanks to Kathy Wake, Lee Jones, Dan Puetz Sr, and John Clement for their work preparing for and running this event.

Also, time to renew your membership, either online or at the pro shop.