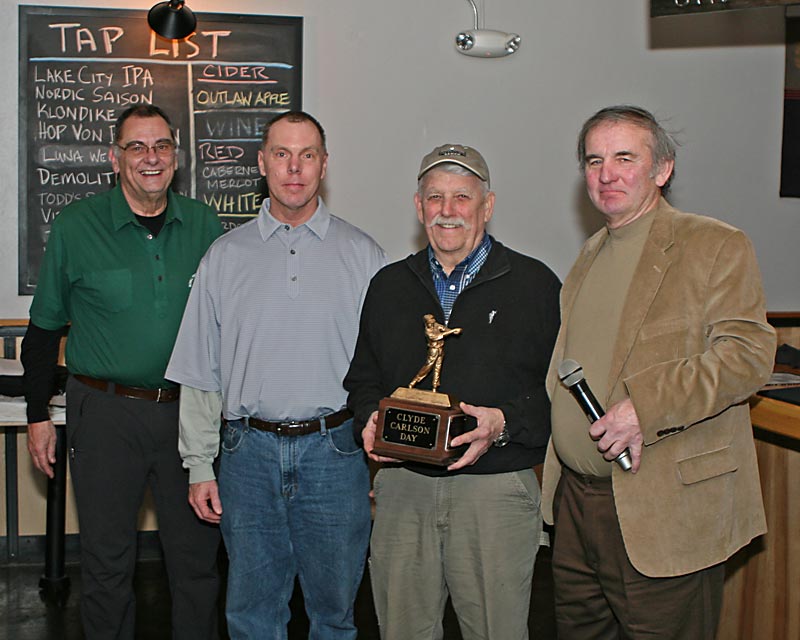 Clyde Carlson with Roger, Mark, and Dan – the day’s champs

In a valiant nine-hole test of golf rain gear by thirteen members of the Men’s Golf Club, Club Champion Mark Ohrenschall won Low Gross (39) and Roger Brown and Dan Puetz Sr tied for Low Net (34). Dan also won the honey pot, longest putt made on hole number nine, with a 7′ 5″ putt worth $55. Congratulations to the day’s champs and to all who played. There was no winner in the second honey pot, chip-ins, as there were no chip-ins. Roger Brown’s timing was a little off, as he played a couple of extra holes and managed to chip-in on both ten and eleven. The money from that honey pot will be used to supplement payouts in upcoming tournaments. 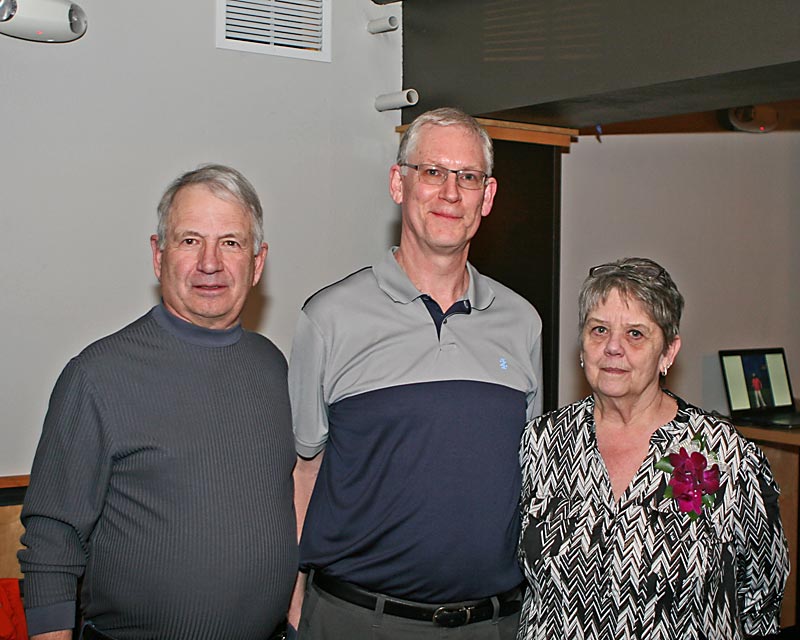 The Annual Meeting & Banquet was a festive affair. We began by celebrating Honorary Member and Club patron Clyde Carlson. Then Dan Puetz Sr led the celebration of John and Gayle Clements contribution to the Club. Dan told revealing stories about John, which spurred John to provide clarification. John served on the Board in various capacities, the latest being Handicap Chairman and, especially, the Tournament Chairman the past eleven years. Gayle, in addition to supporting John in his work for the Club, looked after the Club’s interests while working at the Jackson Park pro shop. As part of the celebration, John was made a Lifetime Member for his service and devotion to the Club. 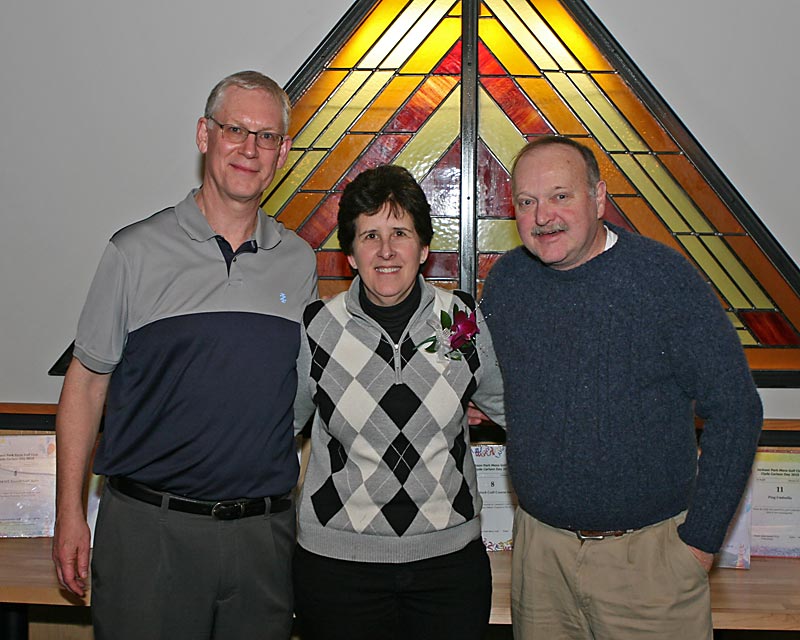 Both Bob Maddox, Jackson Park Maintenance Supervisor, and Kathy Wake, Golf Shop and Interim General Manager, spoke about Jackson Park matters. Plans are for heaters in the driving range this year, according to Bob. The Club is working with Bob to hold work parties for the improvement of the course. Soon we hope to announce the first work party for the spring. Kathy reported the search for the new General Manager is beginning. She also thanked the Club for filling out her questionnaire last spring about golf merchandise preferences. It greatly helped her to stock the pro shop with items that we find useful. She affirmed her commitment to provide us the golf gear we need, including special requests.

Doug Nevins has resigned as Website Manager and Trustee, citing personal reasons. We honored him for his three years of service on the Board and as Webmaster. We anticipate it will take several people to do all the work that he has done. To start, Brett Polen is the new Webmaster in charge of web maintenance.

Jason Hart is the new Tournament Director and Handicap Chairman. Unable to attend, he submitted a report stating no entry fee for the Handicap Division Match Play Tournament. Deadline for sign up is April 17, with matches starting on April 30. The scratch and two-man divisions begin at their usual time, a month later, with a $20 entry fee for both. 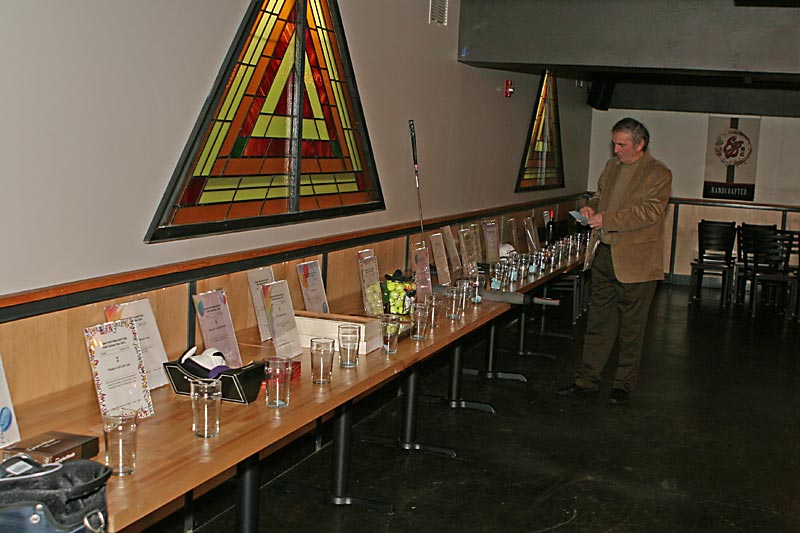 Dan at the raffle

Over thirty items were raffled and auctioned to conclude the evening’s festivities. Lee Jones did a masterful job organizing and running the raffle and auction. Everybody won something.

Jimmy Bucher provided the slide show for the Seattle Cup 2015 at Interbay Golf Course, bringing back fond memories for many present.

Thanks to all who came and enjoyed the Elliott Bay Brewery experience. Special thanks to the organizing committee of Lee Jones, John Clements, Dan Puetz Sr, and Reed Johnson and all who donated items for the raffle and auction.

Our next tournament is the Tombstone on February 20. It is also time to renew your membership with the Club. The current membership ends at the end of March. Tournament and Membership forms are available on the website and at Jackson Park. 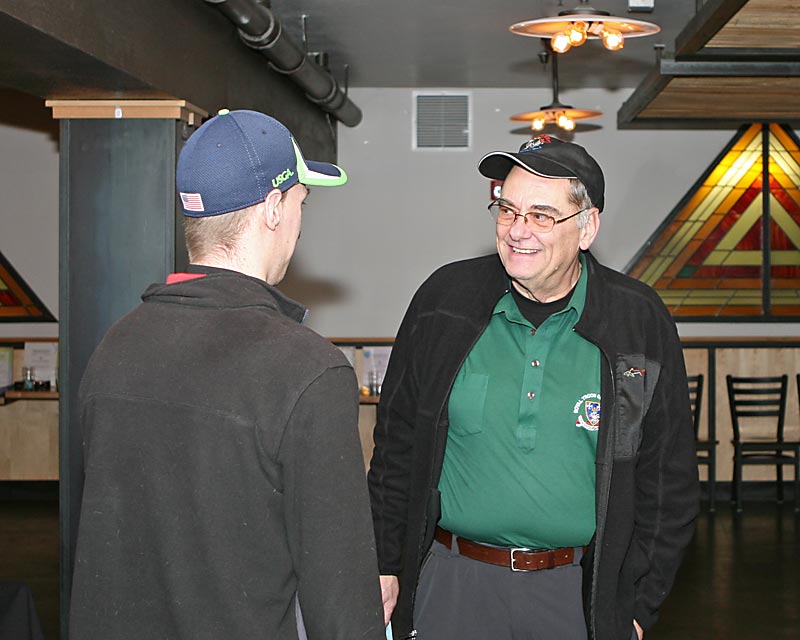